As a dreamvisualizer my main working tool is Lucid Dreaming

and my little life is an endless performance, a live-action of surreal Infant Terrible Baroque.

a part of the ¨Desensitization¨ series

Bound with a long rope to a big tree, Wolfsmoon was cutting a spiral line with the broom-rake into the grass-leave surface of the park. Coming to the end of the spiral at the tree trunk, he cried for HELP. A random walker offered help and unleashed Wolfsmoon. As a thank you for the help, the random participant was getting the pair of ski as a gift, after he was trying them on the freshly cutted skiløype-spiral.

The performance is a part of the ''Made in Noble China '' series. 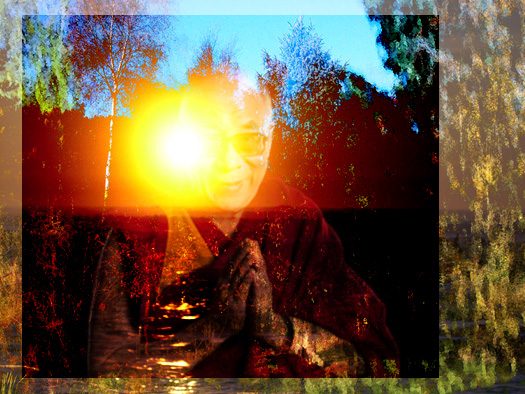 Federal road Nr. 120, from the village Tomter to the lake Mjaer, is one of the most dangerous roads in the area of Oslo, Norway. It is narrow and curvy, with big holes and very bumby. A lot of places the road is partly up to 20 cm sunken towards the white water river and it is a wonder that no heavy truck was going down to the river. And there are a lot of semi-trailers using the RV120 to drive to the E18 to Sweden or to the south of Norway.

The Norwegian Road Administration is also misinforming the drivers with a sign at the top of the valley. At the idyllic lake Mjaer Hobøl kommune had a bathing place, a beach area which is now abandoned and dirty.

The 4 km long RV 120, from Tomter to the bathing place at the lake Mjaer, is a dangerous road for cyclists, because in the sharp curves the cars are allowed to drive 80 km/h.

The Norwegian Road Administration is not willing to lower the speed limit because there has not been a deadly accident.

And the Hobøl Kommune, the local authority is not willing to build a bycicle way from Tomter to the bathing place at the lake Mjaer.

They do not see the potential of this 4 km romantic wild water valley with embarkment dam, a historical saw mill and the last steam of stream trout in the whole area.

In the future, more and more young sporty people will move out of Oslo and live close by this unique river and the RV120 between Tomter and lake Mjaer is going to be an adventure and cultural road without dangerous automobiles.

''Wolf crossing'' was performed on country road RV120, leading to Tomter, Norway. During the live-action Wolfsmoon collected road garbage on 3,5 km of the country road and he took down parts of a frozen waterfall. With this performative action and with the following installation in the little town Tomter, Wolfsmoon wanted to show how many things the people are throwing out of their car windows and he wanted to point out the problems of climate change.

''Buy less, drive less, love more'' was installed in Tomter centrum. In the middle of the installation, some tall wooden sticks, at the top with vegetable boxes painted with the norwegian flag. Surrounded by 3 wooden ''stick tents'', standing on living-room carpets. In front of these ''houses'', shopping trolleys with parts of the frozen waterfall. And in the middle of the installation the 10 liter bag with collected road garbage.

happened at the same weekend as the Norwegian Parliament Election. PAB Open 2013 took place in the abandoned Old County Jail of Bergen, Norway. These to events were inspirering and influencing Wolf Wolfsmoon to the performance with the ambiguitve title '' LOVER ''. ''Lover'' in Norwegian means to promiss, which refers to the promisses the politicians are doing under an election and it means laws. And aditionally the meaning in English.

Weeks in advance Wolfsmoon was Lucid Dreaming about the LOVER performance in a rotten prison cell. But since he is doing his performances like an modern jazz consert, appr. only 20 prosent is ready planned, the rest is free improvisation, an interaction between him as a performer and the audience. So everything is pretty open even some hours before the performance is starting.

And since he lives his life like an endless performance of surreal Infant Terrible Baroque, it is most inspiring waiting for the unknown.

At door to prison cell nr.30 were hanging 2 infos:

''This performance is not suitable for people with Epilepsia, phobic or respiratoric disorders or children.''

In the left corner of the dark prison cell, an old hand broom tray was standing, on top a lady hand bag in snake skin, on the tray a death's-head. Some eggs were laying in and in front of the jaw, pointing direction to an old prison toilet pan, containing 20 Euro bills and big sparklers. In front, on the floor, were several led lamps placed. In the right corner an other hand broom tray filled with halv rotten leaves, on top a toy figure out of an fantasy movie. At the left side of the prison cell, a doll without a head leaned against the wall with the big sign :''No-Euro-Bank''. A scream-mask was placed closer to the ceiling and an old black swallow-tailed coat was hanging at the right wall.

In front of the prison cell the sign : ''The banks are the real criminals''.

Before the interested audience entered the prison cell, to see and interact in the performance LOVER, Wolfsmoon informed about the health risk and asked

the participents to vote on the NO-EURO-BANK party, who promised them freedom and strawberries. Then everybody was getting roped at their hands, also the person he introduced as his lover, who was a psychologist of profession. Then the prison door was getting locked by binding it from the outside. The participants were getting an ballot paper together with 20 Euro bill and strawberry chewing gum in their hands. While the audience were closing their eyes and starting to chew the strawberry flavoured gum, Wolfsmoon was slowly asking them to imagine to lay in a sunny strawberry field, relaxing and enjoying the smell of the red and juicy srawberries. Turning their heads from one side to the other and smelling these beautiful red and tasty berries.Then they should look up in their Lucid Dream phase and getting overflowed of the intense warm sunlight. One of the big sparklers were getting lighted and the pretty dark room started to change the atmosphere from neutral to electrifying and suddenly there was a sulfied smell in the air.

Reminding the participating audience to keep their eyes closed,Wolfsmoon told them to imagine slowly to float with their inner bodies over the strawberry field towards the sun. The noise and the smell of the sparklers were getting more intense because suddenly, one sparkler was lighting 3 other ones. Slowly the bodies should sink down into the strawberries again and a silent period started.

The moment the sparklers were finished, Wolfsmoon was starting some intense blinking LED lamps and a LED ball and he asked the audience to open their eyes again.

After getting untied, everybody was glueing with their gum the 20 Euro bill to the prison wall.

So they received their freedom and had a tast of strawberries in their mouth.

is there art after LIFE,

is there life after ART?

Is it possible to be 2VISUAL4ARTS ?

I screwed a death's-head on my suitcase and walked it as my doggy outside of the prison . Since Bergen is pretty wet like Oporto, humid like a waterfall, I was getting prepared. Putting on a diving mask to be able to breath, binding bandages around my head, not losing to much body temperature and sticking chopsticks in the protection, to have a better contact with the docking station.

So I walked my dog and my weaker self in to the Norwegian Parliament Election polling station at the Townhall of Bergen and did my civic duty as a good citizen of Norway.

The motive: The Norwegian Immigration Appeals Board (UNE) concludes in its report

was provided through clarification of the rules in the White Paper of the Norwegian Parliament.

”Occupy your Fear”
Installation and performance, part of the Oslo Open program, at U.K.S  (Young Artists Society), Oslo, Norway, April 20.+21. 2013.
This multimedia live-action event announces the beginning of Wolfsmoon´s “Desensitization series”, which is going to be his main
working theme, for his performances and paintings in the near future. Wolfsmoon is also going to continue his “No-Euro-Bank series”
expressed both via performance and painting, with body and paint.

10 minutes before the announced start of the performance Wolfsmoon simulated a fire alarm in a back room. Immediately he went
to the show room and requested all the people to leave the building. He was telling them: “Do not be afraid, but please leave slowly
the building for a while.” At the same time the participants could hear outside the siren of a fire truck.
10 minutes later everybody was asked to come in again with the instruction:” Don´t be afraid, now you can come in again,
everything is secured.”
The second part of the OCCUPYyourFEAR live-action started with Wolfsmoon sitting in a shopping trolley, hanging at a big lifting block,
in front of the installation. While the trolley was slowly getting lifted up, the psychiatric nurse fixed different computer hard disks
with elastic bandages around Wolfsmoon´s head and body, as well as she covered him partly with foam.
While hanging in front of the installation wall, the psychiatric nurse was reading lout a text about FEAR and Wolfsmoon was spraying,
with non-smelling chalk spray, at the black surface: “Occupy your fear”.” Shop until you drop”.

OSLywood ( Oslo, Norway and the woods around ) is very icy and dangerous
in February 2013. In the city of Oslo the snow is packed and pressed to
icy lumps on parts of the the streets and the sidewalks.
And in the countryside the small waterfalls are growing bigger every day
turning into huge ice sculptures that are expanding into the country roads
which makes sharp curves especially dangerous.

For the Global Performance Art Walks the 16.Feb.2013,
Wolfsmoon's participates walking with a shopping trolley filled with
small gravel , a shovel and beet juice, to secure parts of the most
dangerous roads and sidewalks in OSLywood ( in and outside of Oslo ).

And 20 hours later the Norwegian Public Road Administration were taking
away the ice lumps with a wide-bucket excavator.

This event (is) was a part of "Scenario"

"DOCUMENT A", a performance series by 2visual4arts, a homage to dOCUMENTA (13).

A part of "No-Euro-Bank" and "DocumentA" performance series.

"Document A" is an international performance project which pays homage to, criticizes or comments on dOCUMENTA(13),

the biggest Contemporary Art event in 2012. The aim is to connect visual artists through the web and reduce cultural

boundaries. As a starting point, the content of the participating artists will be published on the blog 2visual4arts.

2visual4arts is a project focusing on performance art, traditional and cross-over, created by Agnes Btffn and Wolf Wolfsmoon.

Artists are invited to participate in thematic performance projects. The participating artists are working mainly with

text and presented on 2visual4arts and in other related media or adequate venues.

of a new series with the title " Desensitisation". The new part of the "No-Euro-Bank " performance series is called "Inter",

an interview/performance, performed in Norway, Germany and in Portugal, were Wolfsmoon, in the role as Bank director Wolf-ram,

is interviewing people about their concern for the economical future.

In 2002, the year the European Union introduced the currency Euro, Wolf Wolfsmoon started the

"No-Euro-Bank" performance project. In the role as " Bank director Wolf-Ram " he created and

performed live actions and happenings inspired by contemporary significant events in the short history of the currency. 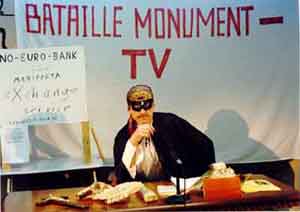 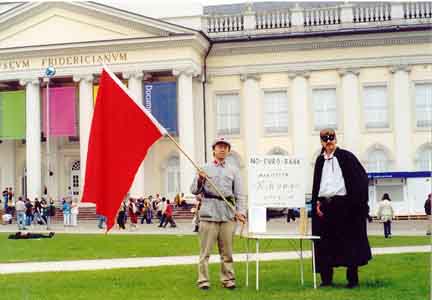 overcome phobias and other anxiety disorders.